Difference between revisions of "Ainsley Cannery" 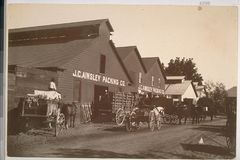 Even as late as 1922, Ainsley was still canning in its premium glass jars[5].

Ainsley trucked apricot pits from the cannery; a 1923 news article describes an accident where the Ainsley truck crossed the railroad tracks after a freight train, but failed to notice the southbound passenger train behind it. "The truck was loaded with apricot pits which were destined for cracking and chemical reduction into oil, dyestuffs, and charcoal."[6]

The cannery was supposedly closed between 1931 and 1934[7]. However, the local newspaper reported its on its imminent reopening in 1932[8], declaring the cannery was starting its pack of 1932 apricots on Friday, July 1, followed by pears and peaches, "all of which will come from the Santa Clara Valley... On account of the depressed business conditions throughout the world, the run this year, as is the case with all other canneries, will be considerably lighter than usual. It is not the intention to open the camp and as far as possible preference of employment will be given to those who have worked there during previous seasons, and to local residents." Another article in August stated that the Ainsley cannery "reopens today when Ainsley's packing company starts production, the cannery will be in production until about the first of September working on peaches and pears."[9]

The cannery was sold to the Drew Canning Company in March 1934; some reports say $200,000, but the official records claim that the sale was completed on March 13, 1934 for $150,000. At the time of the closure, John Colpitts Ainsley was president, with W. H. Lloyd as secretary. The cannery property included 470 feet of frontage on Harrison Street, and 52 feet on Campbell Ave[10]. Ainsley had previously transferred the cannery from the "Ainsley Packing to the "Ainsley Corporation" in December 1933[11]. Ainsley apparently had a deed of trust on part of the Security Warehouse and Cold Storage[12].

The "Ainsley Corporation" was still operating in Campbell as late as 1939 when the corporation requested a camp permit for its workers[13].

Mrs. Margaret Murdock, who had run the cannery's cafeteria for eight years before the 1931 closing, regained control of the cafeteria in 1934[14]. Drew later sold the plant to Hunt Brothers Packing Company in 1946. Railfans remember small 0-6-0 switchers shuffling boxcars at the canneries in the 1940's[15].

The buildings of the Ainsley cannery were starting to be torn down by the 1960's[16].