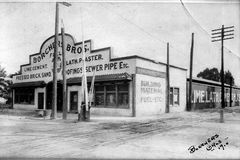 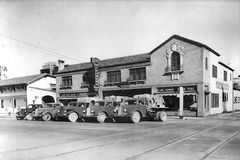 Borchers Brothers was a long-time San Jose wholesale building materials, coal, and grain retailer operating in San Jose during the 20th century. The brothers were G.W. and R.H. The company first appeared around 1910. Borchers Brothers prospered as San Jose grew in the 1950's and 1960's. The company closed in the mid-1990's.

The business's primary storefront for many years was at 396 North First Street, and stretched between First and Second north of the railroad tracks. Borchers Brothers (GW and RH) wholesale and retail wood, coal, and grain. Their first business, built around 1910, was on the site of the former Western Granite and Marble shed along the north side of the Southern Pacific railroad tracks. That first building was a false-front clapboard building with a shed behind it. In 1926, the company built a more elaborate facade from brick. The company sold the First Street land in 1982, and moved their yard to Sunol Street south of Del Monte Plant #3.