Difference between revisions of "California Prune and Apricot Growers" 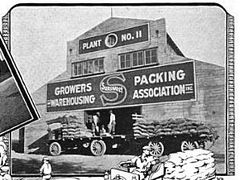 The California Prune and Apricot Growers (commonly known as Sunsweet) is a long-lived co-operative for prune and apricot growers. Founded in San Jose in 1917, the company adapted to changes in marketing and in the locations of the crops. The company has also handled prune and apricot-related products, including canned prunes[1], prune juice, and apricot pit oil[2]. The company is currently based in Yuba City.

The association was started in the spring of 1917. Early management included Frank Coykendall (who sold his Andrews and Coykendall Ham Company to avoid conflicts of interest) and office manager Samuel Squibb[3] (who later worked for the George E. Hyde & Company in Campbell.

The co-operative initially served only for negotiating and marketing, but relied on independent packers to actually handle the crop. For the 1917 season, the association got commitments from farmers producing 75% of that year’s crop. Forty-five packers around the state were signed up to actually handle the crop. The San Jose list includes many of the smaller dried fruit packers[4]:

Even with their large fraction of the California fruit crop, he association only sold about 47% of the total crop either because of cancelled memberships or growers secretly selling to packers.

The packers working with Sunsweet that year formed their own organization called the Affiliated Packers[5].

Working with the independent packers also turned out to be challenging from a business standpoint. Packing costs varied wildly by packing house. In some cases, packers either delayed paying the association for fruit sold or underestimated the crop owned by the association. In the most obvious case, the George N. Herbert Packing Company supposedly sold a million pounds of the crop without informing the association and held on to the $100,000 in proceeds, leading to a lawsuit, a demand for a $320,000 bond, and a louder demand for the immediate return of 1.9 million pounds of prunes and 178,000 pounds of apricots which belonged to Sunsweet. "...Mr Herbert gave copies of the shipping sheets to the inspectors, so as to permit the fruit to be checked out of the packing plant, but sent only a few selected sheets thereof to the sales department so that the officers of the corporation would be unable to find out that he was liable to the corporation for the purchase of the fruit."[6]. Sunsweet grabbed the twenty-two carloads of packed fruit and 200 tons of prunes the next week[7]. As a result, the association began to make offers to buy dried fruit packing houses so they could control their own crop[8]. The company also planned to manage the selling of apricot pits[9]Sunsweet acquired 16 packing houses before the beginning of the 1918 crop[10], first one bought was the George N. Herbert Packing Company plant.

Relations were mixed with the independent packers and brokers who had previously controlled the crops. At its inception, E. N. Richmond was quoted as saying that the brokers won't try to break the prices of the growers association[12]. In 1928, the association explicitly told packers they wouldn't tolerate encouraging growers to break contracts[13]. The World War also gave cover, because the U.S. department managing food was attempting to control prices by banning fruit buyers from soliciting someone who had already signed a contract[14]. The company was also challenged by lower prices for European fruit. Frank Coykendall summarized the market and Bosnian prunes in the February 1923 Western Canner and Packer

Sunsweet also attempted to control the price by keeping smaller and off-grade fruit off the market. During the 1918 season, they announced that smaller fruit would not be dried, but would be instead turned into "Mar-jam", the company's cross between marmalade and jam. The former O. A. Harlan packing house at 4th and Lewis was used for by-products including jam-making[15].

Sunsweet representatives also covered areas further away from their packing houses. During the 1929 season, the company representatives came to Hayward to encourage growers to hold out for higher prices[16]

Sunsweet may have also had rebellions from within. In 1925, a group of growers in Healdsburg considered forming a separate organization. The growers were angered by Sonoma county prunes being billed as from the "Santa Clara Valley"[17].

In 1939,the corporation sold 95,000 tons of prunes, apricots, peaches, and mixed fruits from Santa Clara and San Benito county packing houses worth $9.5 million[18].

Hemet: Photo at [3]. Plant is listed there as Growers Packing and Warehousing #5.

1921 Sanborn map shows main building has storage on first and second floors, grading on third, and a "process room" (sulfuring?) on second floor. Separate warehouse. Separate boiler house, with oil tanks at ground level. (Not on rolls by 1921)

Sunsweet had several plants in San Jose, ranging from primitive and small to modern and large.

Bob Morris photos from early 1960's show the Mission-style tower and shed roof of the former Andrews and Coykendall Ham Company. The plant was built in 1917 as three-story, concrete. 1950 Sanborn map shows used for grading and packing.

Plant 14, the former J. W. Chilton Fruit Packing Plant, was bought by the association in 1922 and used for their "special carton trade"[50]. The engineer at the plant for some years was Frank Frymire, who had previously worked for O. A. Harlan[51].