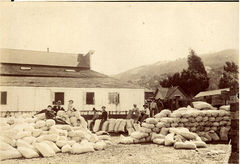 The Gem City Packing Company was a dried fruit packer in Los Gatos. The company was probably founded in 1913 (based on the timing of a California Railroad Commission lawsuit] over access to water for the plant)[1]. Gem City was packing for the California Prune and Apricot Growers in 1917[2], and was soon purchased outright.

Sunsweet turned the plant over to processing the prune and apricot pits piling up at other plants. (""The Prune and Apricot Growers Association will convert one of its packing houses into an institution for cracking apricot pits and nothing else. The pits from the other packing plants will be collected and shipped to the Gem City packing house at Vasona."[3]) Sunsweet later sold the plant to Sewall Brown and Company, who continued in the same line of business.