Difference between revisions of "Hamlin Fruit" 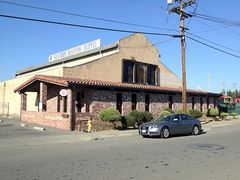 The building still exists on Sunol St. in San Jose.

Founder: Edwin Hamlin. Edwin had moved to San Jose from Minnesota after the turn of the century; he'd been a "hardware merchant" back in Lake Crystal, Minnesota. He owned a bunch of farming land in the area and made his home right next to Palm Haven on what is today 779 Bird. The old house is still there. Hamlin had been the manager for a pottery company according to the 1920 census; his son, Homer, who helped with Hamlin Fruit, had listed his occupation on a World War I draft card as working on the kilns. Edwin supposedly built 631 Sunol Street for Hamlin Packing. By 1930, Edwin is listing his occupation as "real estate salesman".