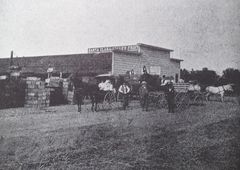 The Santa Clara Valley Fruit Company was a dried fruit packer in San Jose, California. D. Denslow Brooks was the manager[1][2]. Brooks' father-in-law was pioneer orchardist Sanford Coe[3]. The company appeared in 1895[4] using a location similar to the Riverdale Fruit Company run by Sanford Coe. Coe had died in 1894, so it's likely that Brooks took over his father-in-law's business and plant. The company was also listed as a fruit dryer in the 1896 city directory. The company was a drop-off location for fruit for the California Cured Fruit Association in 1903. A 1900 advertisement lists them as a happy user of the Anderson Prune Dipper Company prune grader[5]

The company appeared in city directories between 1896 and 1906, though their plant was leased to J. W. Chilton Fruit Packing for one year in 1903 following the collapse of Porter Brothers[6]. Advertisements for the company's fruit appeared in at least one eastern paper in 1903[7]

The photos of Santa Clara Valley Fruit company and the George Herbert plant look almost identical - a low, one-story wooden bulding with a false front. They're also reminiscent of Start and Morrison's plant on the east side, as well as many of the turn-of-the-century buildings in downtown Campbell.