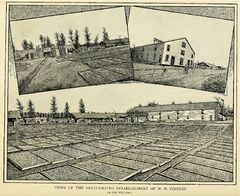 Cozzens incorporated his own fruit packing company in 1879 as the Cozzens Fruit Company[2][3] The company's drying yard sat behind his home near Minnesota and Newport Avenues. The business's San Jose location shows up on an 1891 Sanborn map as a grain warehouse on Ryland Street at Santa Teresa Street, listed as "hay warehouse". An 1898 city directory gives the address as Ryland Street at River Street. By 1900, the business was listed in Santa Clara.

Cozzens Senior died in 1883; his son, William Jr. kept the business running. William Jr. increased the family lands to new property on Stevens Creek Road and Informatory Road (now Bascom Ave), and expanded the business to Newhall in Southern California. Some of those lands apparently were run by another son, Joshua Cozzens. The company declared bankruptcy in 1892, $150,000 in debt. It managed to reopen, with C.M. Webber and George Bowman as directors[4], but finally closed for good after the turn of the century.