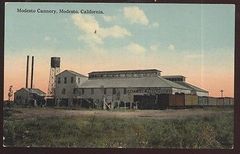 Pratt-Low Preserving Company was a long-lived canner that was founded in Santa Clara, California in 1905[2][3]. Their flagship cannery, located on 22 acres at Bellomy and the Alameda in Santa Clara, had formerly been the Pacific Manufacturing Company. Pratt-Low was founded by George Pratt, D. Low, and Frank Wilder; Pratt had been a fruit buyer[4]. Wilder previously worked for the California Fruit Canners Association. Wilder continued to be a force for the food industry in California; he also was a founder of the Security Warehouse and Cold Storage Company in San Jose[5].

Ad in February, 1923 Western Canner and Packer mentions "four model canneries" including the Santa Clara site, a Modesto plant that planned to can 250,000 cases of apricots and peaches during the 1922 season[6], and a Redwood City cannery along the Dumbarton cutoff[7]. Edith Daley reported on her visit to the Santa Clara cannery in the July 23, 1919 San Jose Evening News.

Pratt-Low was taken over by Harry A. Irving of the Carmel Canning Company in 1945[8]; the company merged with Southern California-based Fitzsimmons stores in 1956 (listed as Thriftimart, Inc. in a 1957 SEC filing[9]), and was sold to the Duffy-Mott Company in 1960. Pratt-Low cut back to canning only prune and tomato juice in 1971, and shut down for good in April 1978.

Migrant worker housing from Pratt-Low was bought by orchardist Eiichi Sakauye in 1952; those buildings were later moved to San Jose's History Park[10].