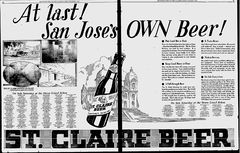 The Saint Claire Brewing Company was a San Jose brewery, opened just after the repeal of prohibition in 1933. The company began selling beer on Saturday, December 9, 1933[1].

The plant opened in the former Virden Packing plant on Lincoln Ave. in San Jose in 1933, claiming a potential capacity of 150,000 barrels. Richard Simon was the owner of the company[2]

The company may have disappeared as early as 1936 when it was sued by a supplier of some of its equipment[3].