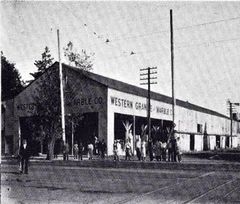 Western Granite and Marble was a San Jose building materials supplier in existence around the turn of the 20th century. The company was formed from the partnership of Combs, Blanchard & O'Neil, and incorporated in 1888. The partnership was formed in 1883 from the merger of a marble business owned by J.W. Combs, and a granite company owned by W. W. Blanchard and T. O'Neil. C. T. Ryland was president in 1888.