In the years that we've lived in our house, one of my low-grade pet peeves have been, of all things, the light switches near the entry to the house. Here, we've got these neat paneled walls that have mostly survived the last fifty years in good shape, but the switch plate in the hallway always looked like something out of a cheap 1970's hardware store. The 4 switch plate was the stock ivory plate which never looked good against the paneling. The switches themselves were the odd, curved original 1960's light switches in brown. Some previous owner put the dining room lights on a standard GE dimmer, which contrasted badly with the rest. And it all sat in the middle of one of the nicer bits of paneling, right there at the entry to the house. It's better than it was - when we moved in, two of the switches were actually remote-control X-10 switches,with some very odd buttons with strange extra bits protruding out of the space intended for a typical light switch. 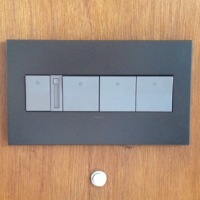 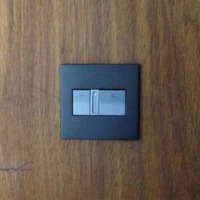 Now, you might say that no one really looks at light switches, and a slight mismatch isn't a big deal. But that plate always annoyed me, starting with the non-matching ivory color. Unfortunately, replacing it wasn't a quick weekend job; 4 gang switch plates aren't a standard item at the hardware store, and while they're available for a steep price by mail order, I always got the feeling the plate was only part of the problem. I suspect the dated electrical stuff also made the occasional dings and stains in the paneling that much more obvious.

Over Christmas this year, we got a fancy Nest thermostat for the house, which definitely dressed up the hallway. The original 1960's thermostat sitting on the wall, as well as the pair of beige decorator switches on that wall, didn't provide the same 21st century look, so I took a trip down to the hardware store in hopes of getting new switches and switch plates in brown, as well as a cover plate to cover the hole from the old thermostat.

I ended up converting the switches in the living room and hallway to use the Adorne switch plates. Here's some before and after photos, along with some lessons learned. 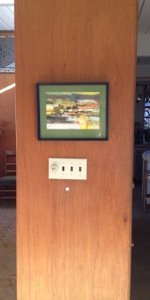 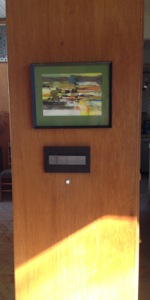 Two switch panel, both three way switches. Hallway has track lighting that could really use a dimmer. 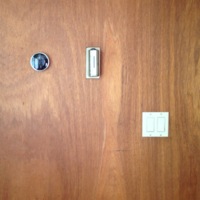 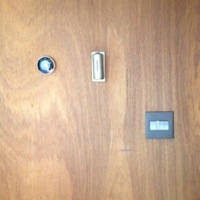 Younger me would probably have discounted these as "yuppie light switches" - the Adorne plates and switches are much more pricey than the standard light switches everyone else has, and so their main attraction is that they look different. (Average price: $6 for each switch, $7-20 for the switch plate depending on material and size, and $40 for the dimmers.) But right now with this house, I like that different look. The switches are larger and make more of a graphic statement with their square shape and contrasting colors and a more modern look - if I'm going to live in a Jetsons future, I'd better be able to have light switches that don't look just like the ones in every tract house in the Valley. The bronze switch plates also fit the look of the Eichler well. There's also a nice range of switches - toggles (like I used), matching dimmers, switches that are press-on, or require a light touch, or require only a wave. The more expensive switches can also be programmed and operated remotely.

Installation isn't much harder than replacing light switches in most cases. Two single switches (one for the outside globe in the back patio, and one for the three-way at the end of the hall) both went quickly, with the only snags being from the starting-to-wear-out 1960's plastic electrical boxes. Installation started by marking wires and removing the existing switches, then installing a new metal cover over the box. The new switches were then wired, pressed into the metal cover until they snapped into place, and the colored switch plate snapped over the metal cover.

The entry was the hardest; the box was already pretty busy with wires, and a couple other circuits unrelated to lighting appeared to be sharing the box. (Strangely, there was conduit leading down out of the box, making me think that power to that box came through the slab, and power to the outlet in the living room floor probably ran through the box as well.) I ended up cutting and replacing a couple of 1960's splices done with a crimp ring and electrical tape. The stock Adorne switches can handle two wires on each terminal which got rid of the need for a couple other wire nuts. Typical Eichler snags existed: the underlying Adorne metal covers want to be grounded, but all our electrical boxes either were plastic or didn't have ground wires available. One of the boxes had a stripped screw hole.

General impressions: for the price of a nice dinner for two, I dressed up most of the switches in the public part of the house. From a design standpoint, I love the look - they're definitely unique, dress up the place, and fit well with the modern Eichler aesthetic. The actual switches felt a little flimsy and not as rugged as a typical switch let alone contractor's grade switches. Pressing the switches into place with multiple 14 gauge wires behind was sometimes a battle. On the plus side, having the clamp-style screw terminals on the top and bottom made the switches easy to wire up compared to old "run a wire around a screw" type.