The Golden Gate Packing Company was one of the earliest San Jose canneries. The company merged with Hunt Brothers Packing Company in 1917. Elmer Chase, the long-time superintendent, later went on to found Richmond Chase, one of the most significant canners in San Jose during the 20th century.

Golden Gate Packing was one of the early fruit processing companies, incorporated in 1877 by W. S. Stevens, the brother-in-law of James M. Dawson who had started the canning industry in San Jose. Dawson had started canning in his basement on the Alameda, then started the San Jose Fruit Packing Company out by 21st and Julian. (Basements and the corners of orchards were the garages for the fruit start-ups of the time.) San Jose Fruit Packing Company company prospered and grew, went through various mergers, and constructed a cannery off Auzerais St. which eventually became Del Monte Plant #3, the largest cannery in the world.

For whatever reason, Stevens didn't stay with his brother-in-law's company, but set out on his own, got funding, and built his own cannery. Golden Gate, located their plant right on the railroad, right where the line from San Francisco split east of the depot. One track headed south towards Gilroy on 4th Street through San Jose; the other curved northward through today's Japantown heading for Oakland, Omaha, and points east. Golden Gate's location at 361 North Fourth Street (between Julian and Hensley) had some impressive brick buildings and a line of palms lining the Fourth Street frontage. George Bowman, the superintendent, was enough of a mover and shaker that he was also a vice-president for Garden City National Bank.

Bowman's bio highlights that the company sold canned vegetables and fruits, and their Golden Gate brand apricots were well-respected in England. In 1888, they were canning 1.975 million cans, and had 450 employees. The December 7, 1906 Montreal Gazette's ad from Fraser, Viger & Co., Italian Warehouse, called out their source of fruit. "Just in time for our Christmas trade, a shipment of selected extra quality canned fruits from the Golden Gate Packing Company, San Jose, California." Apricots, white cherries, greengage plums, golden drop plums, egg plums, damson plums, lemon cling peaches, yellow crawford peaches, white heath peaches, and bartlett pears were all listed by name - quite a variety for those of use used to exactly one kind of canned peach or plum. By 1922, it was one of the largest fruit packing plants on the West Coast, selling to the East Coast and to Europe.

On the back side of the plant, the spur tracks pointed straight towards the passenger station three blocks away, and the congested tracks kept crews working the cannery from being able to throw the switches into the cannery at will. Instead, each employee timetable into the 1930's indicated the whistle signal the engineer would need to blow to get the Fourth Street tower operator to change the switches.

Golden Gate Packing stayed independent in 1899 as other canneries joined the California Fruit Canners' Association. (See Opposition to the California Fruit Canners' Association for more details of the trust battled]]. Although American Can Company was apparently charging the independents much higher prices, Golden Gate still found cans in 1901, both by making cans themselves and relying on the San Francisco Can Company[1].

The Great 1906 Earthquake appears to have caused damage to Golden Gate, but the buildings stay up. A June, 1906 list of building permits shows that Golden Gate was expecting $3,000 in repairs on the main plant[2].

As part of the battles with the CFCA, Golden Gate had attracted the attention of the Hunt Brothers Packing Company, another pioneering canning company, who proposed a merger with Golden Gate in 1917. The combined companies had a stock value of around two million dollars. '"Yes, we have effected a merger." said Elmer E. Chase today. "There always have been close working relations between our company and Hunt Brothers, but henceforth we will operate as one concern. We can operate cheaper and with greater facility. While we have agreed upon terms of consolidation, all the details have not been worked out yet, but will be shortly." ' [3]. To the Mercury Herald, he declared "the Golden Gate Packing Company will really not lose its individuality...the proposed merger will increase the furled of distribution of local products.... we will not hesitate to buy, say for instance, a bumper crop because we know that with these big resources behind us we can turn out a pack of unexpected magnitude when the crop warrants."[4]

Within a year, Golden Gate's, Elmer Chase, chose to leave the company after the purchase and start his own packing company, Richmond Chase, which turns up in other canning stories. Chase continued as a director; in 1922, when they did a reverse split of the stock, the directors of the company were still Chase, M. B. Bowman, J. Stow Ballard, Edna Kuhn, and Charles K. Kuhn[5]. When the company moved its place of business to San Francisco soon after, Hunt Brothers was the majority owner of the stock.

Hunts owned the Golden Gate Packing property from 1917 to at least the early 1940's. In the early forties, Hunts was taken over by Val Vita Foods (started by Norton Simon, now known for his Pasadena museum). Richmond Chase used the property in 1945 and was listed as the occupant on the 1950 Sanborn map.

The buildings were still there in 1958, but by 1968, the buildings had been torn down, and if you go out to North Fourth Street, you'll find a Goodwill facility on the site. You can still see the palm trees lining the Fourth Street in front of the cannery site, and if you look carefully on the south side of the property, you can see where the line to Los Angeles curved its way onto Fourth Street. 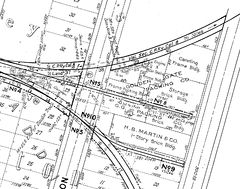 Some example labels exist out on the internet.

says the building burned in 1879 and was rebuilt in 1880. Also had a wine cellar destroyed by the fire.

Another history, from Pen Pictures From The Garden of the World or Santa Clara County, California, Illustrated (Edited by H. S. Foote.- Chicago: The Lewis Publishing Company, 1888.):

This company have their works on Julian Street, between Third and Fourth Streets, and was started, in 1875, by W. H. Mantz and W. S. Stevens. It afterwards became the property of a joint-stock company, and was finally incorporated, in 1877, by F. S. Hinds, A. P. Jordan, and H. A. Keinath, of San Jose. The original premises were burnt to the ground, December 19, 1879, and was rebuilt in May, 1880. It is a two-story building, one hundred and twenty feet in length, and eighty in width. The cans used are manufactured on the premises. Employment is given to five hundred persons, principally females. The business is increasing each year, showing a larger export, chiefly to Eastern and foreign markets.

Secrets of Canning lists a plant in San Lorenzo in 1886.