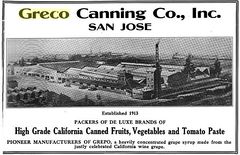 Greco was the world's largest tomato canner during World War II[4] and "one of the largest canners of string beans". The company also made Grepo, a processed grape syrup. They started by selling primarily to the "Latin" market. They also manufactured tomato paste products, with Edith Daley commenting on their boiler for making toms-butter (tomato paste) being "big enough to boil Lake Michigan, Saginaw included!"[5].

A 1920's employee photo in the Greco Family Archive on Facebook shows that the warehouse for the cannery was being operated by the Lawrence Warehouse Company.

Greco was one of the early tomato paste producers in the Santa Clara Valley. His initial attempt in 1916 failed because of problems with the machinery. The details of the problems were documented in a 1920 lawsuit by P. Pastene and Company over Greco's failure to deliver promised tomato paste in the 1916 season[8][9].