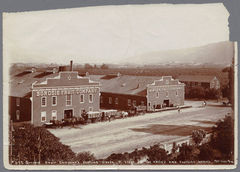 The Sorosis Fruit Company was a dried fruit packer and owner of orchards located in Saratoga, California. The ranch was originally owned by Wlliam Farrington who first planted fruit trees[1] Farrington sold to F. M. "Borax" Smith; Smith had the property managed by Mark Calkins, with 200 acres of orchards as well as their own canning and packing plant[2]. Frank Abernathy was another early ranch superintendent[3] The company also was affiliated with other packers; Sorosis appears in San Francisco Call 1900 list of dropoff locations for California Cured Fruit Association. The ranch was sold in 1908. Joseph A. Teresi later ran the property and the fruit company[4].

August 2, 1903 San Jose Evening News mentions a new evaporator being built - a new bit of technology for the valley.

The September 13, 1906 Pacific Rural News described a bit about the ranch:

"First Car of Prunes Shipped from Valley: "San Jose Herald, August 29: the first car of this season's prunes was shipped by Sorosis Fruit Company on the Saratoga Road today, the destination being Minneapolis, and the purchaser being a wholesale house in that city. The shipment consisted of a full carload of the graded fruit, all of first-class quality, although not averaging large sizes.
"Manager Crandall stated to a Herald representative this morning that large sizes are scarce this season throughout the valley, notwithstanding the belief some time ago that large sizes would be abundant. He stated further that the packers and growers will have to revise their figures, at least as far as this valley is concerned, as the prune crop here will be much less than has been estimated. Now that the harvesting is fairly under way, it is evident that the crop will fall considerably under the figures that were generally conceded several weeks ago.
"The 445 boxes shipped by Manager Crandall ran as follows: 25 boxes 40-50, 110 boxes 50-60, 170 boxes 60-70, 65 boxes 70-80, 50 boxes 80-90, 25 boxes 90-100.

The packing house buildings were later used by the Campbell Cage Company, a manufacturer of poultry cages[5][6]. The buildings suffered a fire around 1976; plans for converting the site to a subdivision were suggested to the Saratoga City Council on September 1, 1976[7].