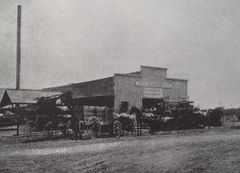 George N. Herbert Packing Company started in a small packing house on Meridian Road in San Jose in 1890[3]. In 1898, Herbert built a one-story packing house at Lincoln and Moorpark Avenues[4]. That packing house burned on June 30, 1901 - losing 450 tons of prunes, and buildings covering an acre. The fire also set the adjacent narrow gauge tracks on fire. 250 tons were owned by the California Cured Fruit Association, rest belonged to Herbert except for 20 tons owned by Seglemen Brothers of New York, awaiting shipping instructions." The fire completely destroyed the "immense dryer and packing house on Lincoln Ave."; the immense piles of prunes glowed like a volcano”[5][6]. Herbert rebuilt his plant in 40 days as a three-story packing house in the middle of the Lincoln block. The plant was expanded in 1915, resulting in a building 166 feet long, 82 feet wide, and three stories high with concrete vaults for steaming fruit and sorting machinery on the second floor[7].

Herbert did contract packing for the California Prune and Apricot Growers in 1917 in the organization’s first year[8]. Herbert supposedly sold a million pounds of the crop without informing the association and holding on to the $100,000 in payment, leading to a lawsuit, a demand for a $320,000 bond, and a louder demand for the immediate return of 1.9 million pounds of prunes and 178,000 pounds of apricots which belonged to Sunsweet. "...Mr Herbert gave copies of the shipping sheets to the inspectors, so as to permit the fruit to be checked out of the packing plant, but sent only a few selected sheets thereof to the sales department so that the officers of the corporation would be unable to find out that he was liable to the corporation for the purchase of the fruit."[9]. Sunsweet grabbed the twenty-two carloads of packed fruit and 200 tons of prunes the next week[10]. Because of the trouble with Herbert and similar issues with other packers, Sunsweet changed their operating style from contracting with packing houses to leasing or purchasing them outright. Sunsweet purchased the Herbert packing house in June 1918[11][12]. The building became Sunsweet’s Plant #6.

Herbert also began buying land. "George N. Herbert has purchased 110 acres of the Thomas Fisher estate, a short distance south of Coyote, for between $70,000 and $75,000. Mr. Herbert stated that he purchased the property owing to the great richness of the soil, which he considers the best prune land in the valley. His 25 years' experience in the packing business has taught him that the largest and highest quality prunes are raised in the territory running from Edenvale to several miles south of Coyote. He stated also that the biggest production of prunes comes from this section.”[13]. Herbert sold the land in 1920 Douglas Sim for $150,000. The land included 100 acres of prunes and ten acres of apricots[14]. Headline showed it as largest sale of the year. A separate parcel at Coyote was apparently sold to D. Campisi and Carlo Aiello in February, 1920[15].