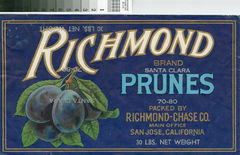 Prune crate label from Richmond-Chase, intended for wholesale 30 pound boxes of dried prunes. The "70-80" notation indicates that 70-80 prunes would weigh a pound.

The Richmond-Chase Company was a San Jose-based dried fruit packer and canner run by Edmund Nutting Richmond and Elmer Chase. The company grew from a single plant to the largest independent dried and canned fruit companies in the U.S., and one of California's four largest canners.

Richmond-Chase was formed in 1919 by Richmond and Chase. Ernest Richmond had formerly been the manager for the J. K. Armsby company's dried fruit business in the Santa Clara Valley, and was also the son of a former Armsby manager. When the Armsby company merged into the California Packing Corporation in 1916, Richmond broke off on his own to form the E. N. Richmond company. Elmer Chase came from the canning side of the fruit business, and had operated the Golden Gate Packing Company. Chase, in fact, had worked his way up from laborer to superintendent. When Golden Gate was bought by Hunt Brothers Packing Company in 1918, Chase joined the new company, but by 1919 had joined Richmond in the new venture.

An announcement for the new company appeared early in February, commenting on Chase's departure from Golden Gate around a year after its purchase by Hunt Brothers Packing Company and on the intended continued operation of Richmond's dried fruit packing business[1]. Edith Daley interviewed the two founders in 1919[2]. The article also mentions that Chase still owned a share of Golden Gate's stock. Several family came to join Richmond and Chase, including Edmund Richmond's brother C. R. Richmond, Chase's son E. E. Chase, as well as "F. E. Whipple, A. W. Hutchins, George A Richmond, A. D. Curtner, and C. M. O'Brien." C. R. Richmond and F. E. Whipple had taken over for Richmond when he left J. K. Armsby in 1916.

Richmond-Chase expanded through several plants, starting off with a dried fruit plant in Edenvale and San Jose and a cannery in San Jose. Richmond Chase's cannery on Stockton Ave. in San Jose was the flagship property through the company's life, closing only in 1982.

By 1941, the company had dried fruit plants at San Jose and Edenvale, canning plants in San Jose and Stockton, and receiving stations in Gilroy, Mountain View, Hollister, and Healdsburg[3][4]. The headquarters was still in downtown San Jose. They had also moved into fruit juices and nectars. The cannery business attracted fruit from locations outside the Santa Clara Valley, with the 1941 pack receiving peaches from Brentwood, Yuba City, and Marysville[5].

The company also moved into the frozen foods business in 1946.

Richmond-Chase's fruit business was derived from E.N. Richmond. Richmond had formerly worked for J. K. Armsby. When that company merged into the new California Packing Corporation in 1916, Richmond left to work for himself. He initially leased the Edenvale Packing Company plant in Edenvale. In 1918, E. N. Richmond also leased the large packing house of Castle Brothers at Cinnabar and Montgomery... capacity of 100 tons a day, 3 stories. Mr. Richmond has also taken over the old Scott plant near Meridian Corners which will serve a two-fold purpose of a receiving and grading station[8].

in 1918, E. N. Richmond leased the large packing house of Castle Brothers at Cinnabar and Montgomery ("capacity of 100 tons a day, 3 stories") as well as a dried fruit packing house at Meridian Corners (Saratoga Ave. and Stevens Creek Road) to use as a receiving and grading station. The Meridian Corners plant was formerly operated as "the Scott plant"[9].

The company expanded the Cinnabar plant in 1919. The new Plant #2 was a new facility, built by Richmond-Chase soon after inception[10]:

The Richmond-Chase Company of San Jose has broken ground for the erection of a new dried fruit packing plant alongside of the railroad right-of-way and just adjacent to the Castle Brothers plant in San Jose, which the Richmond-Chase Company is operating under lease. The company's new plant, which it is building, will be a modern and sizeable one and will add materially to its already large facilities in the Castle plant and in Mr. Richmond's plant at Edenvale.

"Richmond gave the part which the packer has played in the prune industry, showing how helpless he has been since the war, unable to control the situation and being forced to sell at the end of the seasons for less than the purchase price."

A 1950 Sanborn map shows Richmond-Chase owning the whole block; dried fruit was at the eastern edge in a reinforced concrete three story building with grading on the 3rd floor and bins on the first and second. There was a sulfur box on 2nd, and cannery on west side with a separate boiler house.

Richmond-Chase started in San Jose, and most of its production facilities were in the city. In 1944, plants #1, #2, and $4 were in existence. Plant #1, the dried fruit plant, was in Edenvale just south of San Jose in the former Edenvale Packing Plant[12] Plant #2, the main dried fruit plant, was on Cinnabar Street, half being the former Castle Brothers plant, and the other half built by Richmond-Chase. Plant #4, on Stockton Ave., was the cannery and frozen food plant[13]. By 1947, the company had moved its main office to 817 The Alameda[14]. The site is currently a Whole Foods supermarket.

The main cannery (Plant #4) on Stockton Ave. covered 27 acres. It opened early in the company's life, and was closed in 1982. The buildings disappeared between 1980 and 1987; the site is now a PG&E lot. A employee photo shows the building with its representative notches that preserved street trees formerly on the site[15][16][17]. The plant also had a cold storage warehouse. In 1940, Richmond-Chase requested permission to build a conveyor bridge across Cinnabar.

Richmond-Chase moved their office to the Alameda near the main cannery at some point.

Richmond bought the former Edenvale Packing Company brick warehouse in Edenvale in 1918. The building burned in 1952[19].

There is very little available on the Mountain View plant apart from a company photo and scattered mentions of the operation[20]The plant is obviously not the Clark Canning or California Supply since both are mentioned in the article. The Mountain View plant was processing peaches, pears, and tomatoes in 1930.