The organization ceased operations in 1911[5], then disbanded in 1916 because of various problems, including farmers selling outside the co-op[6][7]. The Sunsweet Story states the Exchange didn't require anyone to sell to them, and growers were alternately annoyed when the co-op didn't sell fruit immediately so they could get cash, and the next season annoyed because the co-op didn't hold on to fruit to get a higher price. Hersey described it as "This high average price was not satisfactory to our members, however, because they did not get the highest price paid anyone acting independently during the season."

The Fruit Exchange also was memorable for its well-built, fireproof packing house on Sunol Street opposite what later became Del Monte's cannery. The plant was built around 1893[9] The large two-story brick structure, regardless of its fireproof design, burned in 1915 while leased to Rosenberg Brothers.

In 1899, the plant was actually a collection of several buildings: two warehouses with loading docks along Sunol Street with a railroad spur west of the buildings, then a brick warehouse to the west of those buildings across the tracks. A separate building to the northwest was joined to the cluster of buildings a a loading dock. An accessory structure was to the south, between the spur and South Pacific Coast mainline[10].

The packing house burned to the ground on August 4, 1915[11]. It had been rented by Rosenberg Brothers. Parts of the site had already been sold to the San Jose Los Gatos Interurban Railroad in 1905[12].

The Exchange was one of the fruit drop-off locations for the California Cured Fruit Association in 1900. 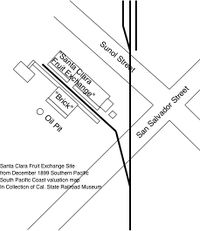